Sorry it's taken me so long to post an update!  We've been fighting the worst four letter word you can imagine--SICK.

About three weeks ago, our sweet Clara started out with a little cough.  At first we thought she was just clearing her throat, but when we took her to the doctor for her vaccines (ugh), they confirmed it was an upper respiratory infection.

Poor, Clara.  She wasn't herself.  She coughed.  She sneezed.  She cried.  She vomited. It was horrible.  We quarantined her from the rest of the kiddos in hopes that it wouldn't spread.  We even assigned certain people to care for Clara so they wouldn't contaminate the others.  We even put on t-shirts when caring for Clara and then took them off and washed them before touching the others.


You must be thinking, "Wow--great work!".  Ha.  The four letter word then spread to Ava (insert another four letter word here that Mom would prefer I not use on the blog).  Poor Ava.   She coughed.  She sneezed.  She cried.  She vomited.  All while Clara did the same. It was terrible.  We hoped the worst was over, but then something even more unfathomable happened.  My mother in law, the caregiver in chief, got the sickness. Ginny was taking charge of the night shift and with her sickness, Michael and I would have to step up.  We did and we thought the had the sickness contained.

It was another three days before Izzy got the illness.  And again, sweet Isabelle wasn't herself.  She coughed.  She sneezed.  She cried.  She vomited.  She vomited so much that she began to wheeze and get dehydrated.  After a trip to the doctor, he confirmed that if Izzy continued in this direction, we would have to hospitalize her.  Needless to say, we were panicked.  We backed off to smaller, more frequent feedings and did a lot of praying. Thank goodness Izzy pulled through without hospitalization.  Unfortunately, before she recovered, she gave the illness to Millie who, in turn, gave it to Luke.  You know the drill....they coughed.  They sneezed.  They cried.  They vomited.  Just today I think we are turning the corner.  We've been sick for almost a month.  Oh my cow...how will I ever make it through pre-school?!

All while this was happening, we said goodbye to my mom and Michael's mom.  Our moms have been AMAZING.  They've cooked, cleaned, burped, cleaned poop/spit up, all while hardly sleeping.  We've been so grateful to have them as long as we did.


In saying goodbye to our moms, we say hello to our au pairs.  Can I just tell you how AWESOME they are?!  They're awesome.  We love them.  We welcomed Merle from Germany and Jess from Sweden two weeks ago.  These are no ordinary au pairs--they are superstar au pairs.  Already they've introduced us to German and Swedish food (mainly candy!), organized my kitchen, and loved on my babies.  They already feel like our family.  I can't say enough about how much we love them.  Here's Jess catching up on her reading. 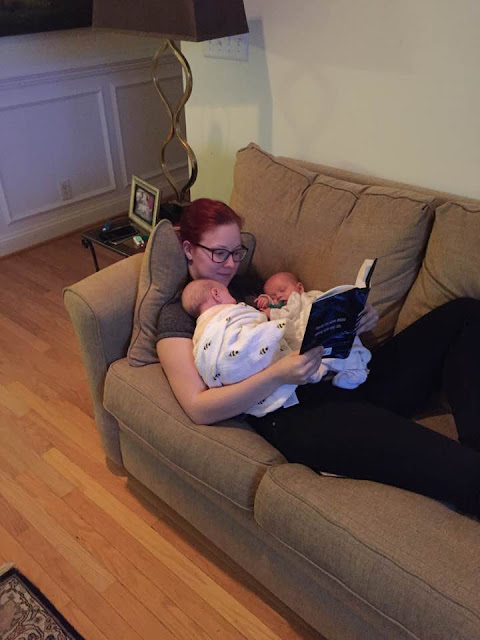 In other news, we had an Ellie scare.  She's been a bit more desperate for attention (imagine that!), and she's been acting out.  Lately, she's been getting into the trash.  Well, late on Friday I found her vomiting uncontrollably in the family room.  After talking to poison control, and desperately calling one of our babysitter friends from down the road, I took Ellie to the vet to find out she'd eaten a tampon.  (Insert another four letter word that Mom wouldn't like).

The doctor said that since tampons expand in liquid, Ellie may not be able to pass it, so we may be looking at exploratory surgery.  You can imagine my stress level when combining this with caring for five newborns.

So, we kept a close eye on Ellie over the weekend (meaning I was on poop patrol). Luckily, things have improved dramatically and she's resting comfortably.  Thank goodness we avoided the surgery!

The last milestone of note happened on Sunday morning.  Michael has been taking a major portion of the night shift duty (while working full time) and as a result, he's exhausted.  I got up for the 4:00 am feed on Sunday morning and told him to keep sleeping until more kiddos woke up.  Well, Izzy woke up first.  I fed her and changed her diaper.  She went right back to sleep.  Luke woke up.  He ate and burped well and just as I was about half way through, Ava woke up.  I put Ava in the Boppy pillow and fed her while Luke finished and burped.  I changed Luke while Ava sucked on her pacifier and then I finished Ava as Millie woke up. I got Millie started eating while I changed Ava and put her back to bed.  Just then, Clara woke up and I double fed Clara and Millie before changing them both and putting them back to bed.  I did it!  I fed all five kiddos!  And Michael got to sleep!  I felt like Mom, Ninja Warrior.  I floated on a cloud for about an hour and then realized how exhausted I was.

Just again this morning, though, I woke up for the 4:00 am feed.  Again, I told Michael to sleep until more kids woke up.  Well, Luke woke first and I fed him.  Followed by Izzy. Followed by Ava.  Followed by Millie.  Once they were all fed, changed, and back asleep, I woke Clara and fed/changed her.  As I sit here now, I've fed all five kiddos alone (again!) and I am feeling better about myself.  Maybe we'll make it after all! 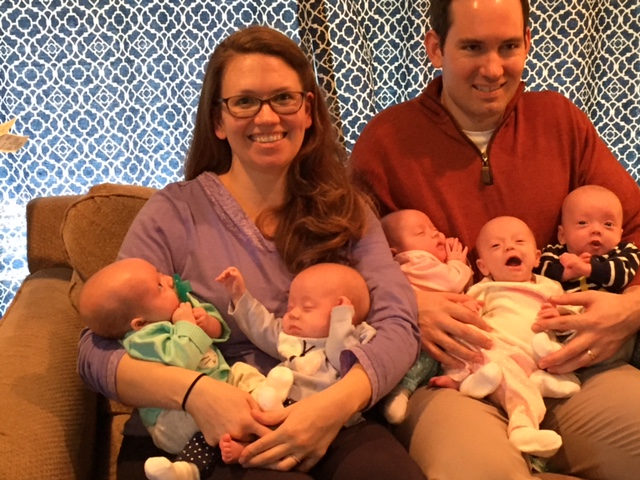 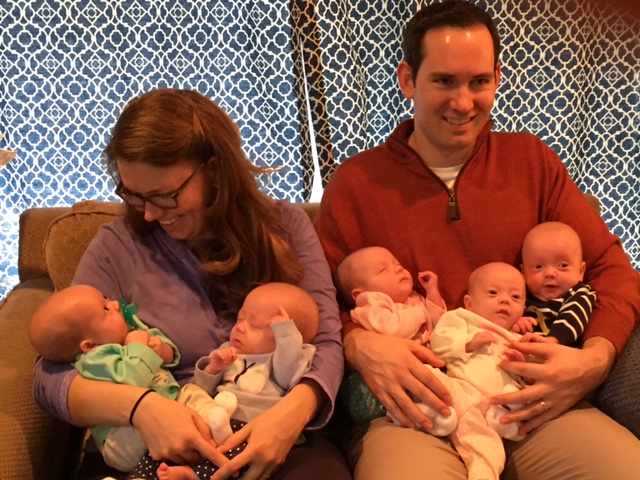 Posted by Margaret Bolton Baudinet at 4:34 AM