I Still See Her


Our second miscarriage was particularly painful--both physically and emotionally.  I was 11 weeks along and needed surgery to remove our baby from my womb.  After some genetic testing, we came to learn that she was a girl who died from Turner's Syndrome.  The knowledge that our baby was a girl was both comforting and unsettling.

As I've told you before, I returned to yoga as part of my healing process. In a heated vinyasa class, you sweat unlike ever before.  As I would sweat (and sometimes cry) through the poses, I would attempt to release the anger, sadness, fear, and inadequacy that I felt.  As I held a plank pose, I would think of the inner strength it takes to continue on after such a loss.  As I balanced in tree pose, I thought of all of the "breezes" in life that can cause a tree to bend but hopefully not break.  At the end of every yoga class comes my favorite part--savasana.  This is when the teacher dims the lights and plays soothing music as the students lie back, close their eyes and reflect on the practice.

One day after a particularly tough class, I laid back, closed my eyes, and began savasana.

And that's when I saw her.

In my mind's eye, I saw our angel of a daughter playing in the backyard in which I played as a child. She was wearing a sailor dress with a big white collar and she carried a stuffed Grover--the same one I used to carry as a child.  She was happy.  She was playful.  She was safe.

But I continued to see her.  At least once a week at the end of yoga class, I would close my eyes and she would appear.  She never seemed to be in pain or in danger.

When I got pregnant last summer with the quints, I had to discontinue my yoga practice. Because of my high risk pregnancy, I wasn't able to exercise--with the exception of light swimming once we moved to Arizona.  When we returned home to Virginia and got the kiddos settled at home, one of the FIRST things I wanted to do was go to yoga.

About six weeks ago I returned to my beloved studio in Charlottesville--FlyDog.  This place is full of some of the most kind, funny, thoughtful individuals you'll meet in Charlottesville.  If you're looking for a yoga community, please join us.  I'm honored to be a part of their tribe.

After two or three classes back at FlyDog, I saw her again.  Our angel daughter.  She was still playing in the sandbox with Grover.  I was filled with emotion.  As joyful as I am to have my adorable quints in my world, there's still a hole in my heart from this missing daughter.  I called my mom and asked if she still had that Grover that I used to carry.   She did.  I ask her to send it to me in hopes that having Grover in my home would make me feel closer to my daughter.

Grover arrived last week.  I wish I could tell you I felt better.  I don't.  I'm still trying to make sense of this sense of loss in the midst of such joy.  I'm sure so many of you can identify. Sometimes such immense joy can refract light onto that piece of sadness that seems to linger longer than most.

While traveling for work last weekend, I watched The Shack.  If you haven't read the book, I highly recommend it.  The movie was also very good.  The story line involves a family whose young daughter is abducted and killed. Her father, Mack, goes back to "the shack" where this tragedy occurred.  Mack meets God, Jesus, and the Holy Spirit at the Shack.  At one point in the movie, God allows Mack to see his beloved Missy.  Missy is playing in a beautiful meadow with other children alongside Jesus.  Mack is comforted by this sight, knowing Missy is happy, safe, and waiting for him in Heaven.

Seeing this made me realize that my angel girl is indeed safe and waiting for me in Heaven.  I can't wait to introduce her to the quints.  I know that it will be a glorious day when we are all reunited.  I do plan to tell the quints about their sister and I do plan to celebrate her as we grow as a family.  Tragedy lives in all of us, but I pray that God will show us the healing that comes in the morning. 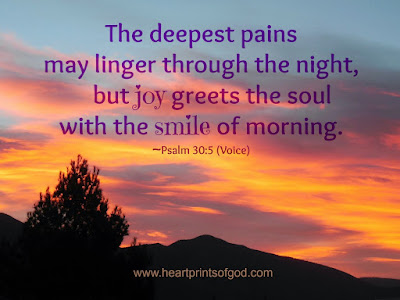