It all started with a phone call.  My sister never calls me at 7 am, so you know something isn't right.

Yes, that daddy.  My daddy died.  He died in his sleep of a heart attack on July 7.

Upon hearing the news, I called my husband and "my person," (ie my friend Carla).  Michael said he'd stay with the children until his parents could arrive and I should get on the road and head towards my family (given that it's a 12-hour drive and we are in the middle of a national pandemic).

When I called Carla, she immediately started packing.  "I'm coming with you. You can't go alone."  Within an hour, she and I were on the long road to mourn my father.  If you have friends like this in your life, don't let them go.  I admire my friends more than they'll ever know.

The only words I could come up with on that first day of mourning was "He's free."  Daddy was free of worry, shame, fear, and guilt.  He was in heaven with his mama, daddy, brother, and many many friends who'd gone ahead of him.  While I knew in my heart Daddy was free, but that didn't make the tears stop any sooner.

The next day we foggily picked out songs and flowers for his funeral.  When I was in college, Daddy and I always listened to "I Can Only Imagine" by MercyMe.  We marveled at what God had done with our lives and couldn't imagine what we'd do once we got to heaven.  We often quoted the song in text messages to each other.  I knew I wanted that song played at his funeral-- it was our song.


The funeral came and I saw Daddy's body for one last time.  I was afraid.  I was afraid of what I would see and feel.  But he looked peaceful, laying there in his UVA tie that I gave him.  He was so proud of the education I earned (that he helped me earn).  I told him how much I loved him and how much I appreciated everything he'd done for me.

But most of all, I told him I would be ok.  I don't know why that was so important for me to tell him, but it was on my heart, so I did.  I don't feel ok right now, honestly, but I know God is close to the grieving.

“Whether you think you can or you can’t, you’re right.”  Henry Ford said it first, but my Daddy said it the most.

Daddy was a big believer in confidence—strength of mind and strength of spirit.  I think that came from his can-do attitude.  You see, Daddy could fix almost anything.  Well, at least he thought he could.

That is, until he met baby furniture.  Then…..things started to get tricky.

Daddy believed in the strength of mind and strength of spirit.  I think some of that was due to his upbringing with his dad who was a craftsman in his own right and a mother with a heart of gold.  I’m comforted today knowing that Daddy is sitting on the beaches of heaven with his mama, his brother, and his daddy talking about old times and telling them all about his grandkids and how we’ll all be together someday.

To any little girl, Daddy is superman.  Ours really was.  He could build it, fix it, dream it, or at  least drive it to wherever/whatever/whenever you needed it to go.  Once in college, I told him I was going to be living in a 12x12 room with two other women—one from Greece and one from Indiana.  He said, “no problem.”  He built me a custom lofted bed with a desk and a closet underneath it.

Well, after he drove it all the way to the University of Virginia, he then got out his five-dollar bills and paid some fraternity brothers to unload it for him.  But that was just ingenuity—as he called it.

He was Superman, I tell you.

Daddy was a smart man.  He believed in the strength of the mind. He educated us to best of his abilities and would tell anyone who had time just how much our education cost him.

But, we loved him for it.  He worked so hard to give us the education we so desperately wanted and needed.  And Daddy was a smart man.  He built Cooper Brothers Construction into a thriving business and then became a very savvy consultant.

What means most to me, though, is that just recently, I started my own business.  Daddy was so proud of that.  He started to call me LT for “Little Tom.”  When I’d start to grow impatient with the bank, he’d say, “Ok, LT, just hold your horses.”  He was there for me when things didn’t go right.  He was there when things really didn’t go right.  He was there for me on my first day at CEO.  He was always coming up with new ideas and affirming me in ways no one else could.  I’ll always be his LT and I plan to continue his legacy as long as God puts breath in my body.

But more than a businessman, he was a father and a grandfather.

I remember when we first brought my children home from the NICU in Arizona, I was standing in the front hall, holding a baby on each hip, doing deep knee bends to keep them from crying.  I hadn’t showered in days and I’m pretty sure make up hadn’t seen the light of day in quite some time.  Daddy looked at me and said, “I’ve never seen you more beautiful.”

Daddy was funny.  If you knew him, you can still hear his laugh in your head, just like me.  It was like music.  Now, usually, he had his pipe in his mouth, which I still don’t know how you laugh and smoke a pipe, but Daddy did.  He loved and laughed so much.

As kids, he used to follow us up the stairs singing Willie Nelson’s “TURNNNN OUT THE LIGGGHTS.  THE PARTY’S OVER.”  We used the giggle at how ridiculous it was.  Both the song and the singing.  Mama would roll her eyes and each night would end with a smile from all of us.

Some times he would sing Seven Spanish Angels just to get on Mama’s nerves, but his favorite was Mamas Don’t Let Your Babies Grow Up to Be Cowboys.  We still love that one.  Even my kiddos know that one.

Daddy, we’ll miss you.  As the teller of ghost stories and the driver of the boat in the summer.  Mr. Fix It. The steering wheel percussionist on long drives, you were everything we needed in a father and everything we could’ve ever dreamt of in a Daddy.

As your Mama, Clara Bolton, once said, sometimes things get hard and just have to wade through them.  So Daddy, we miss you, but we’re going to wade through, because that’s what you would’ve done.  You would’ve made a list, gotten up early, and waded through.  So we will, too.  And we look forward to the day when we’re all together again.

But, I'm not angry with God about Daddy.  I wish I'd had more time with Daddy, but I also know the time we had was meaningful.  When I went to visit Daddy's graveside later in the week last week, he assured me he was ok. There are two trees that overlap over Daddy's grave and as I sat down, the sun peeked through those two trees and warmed my shoulders.  It was if Daddy and God were assuring me he was ok and just as I'd said days before, we would be ok, too.

I think I'm most grateful for the family lake trip we took just two weeks before Daddy died.  That is how he'd want to be remembered.  But Daddy is probably also annoyed with me and my family that we're so overwhelmed by all of this.  He would tell us he's free and for us to enjoy the time we have left on this Earth and then to come be with him in Heaven on God's time.  He'll be the one singing Willie Nelson songs. 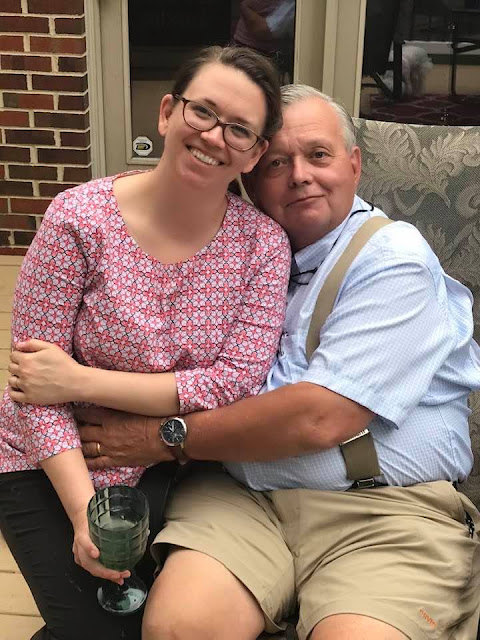 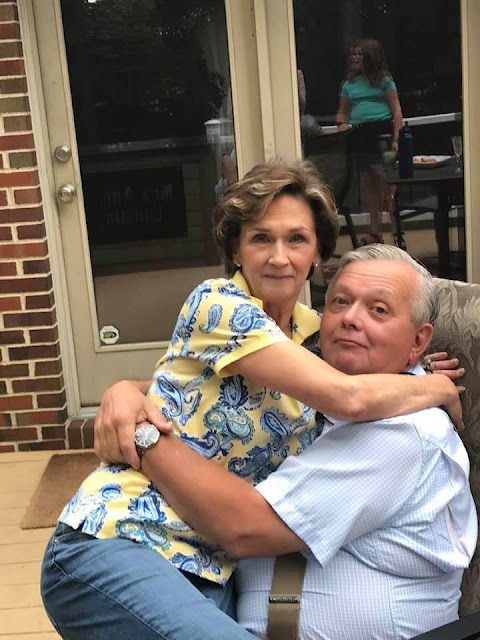 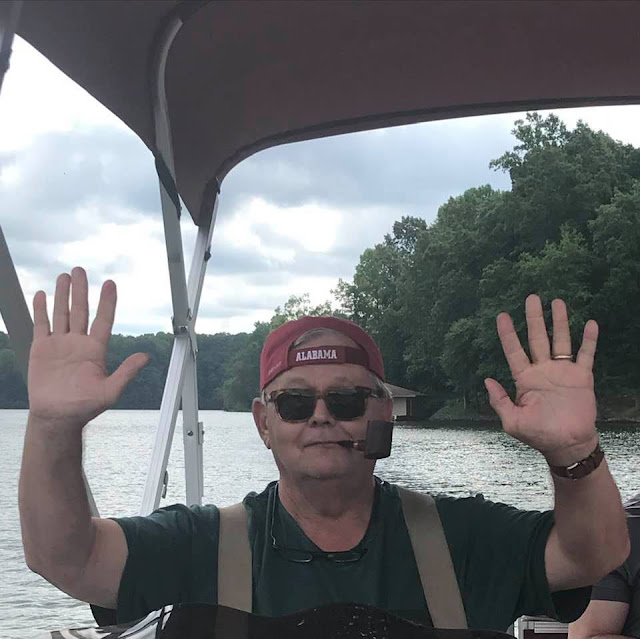 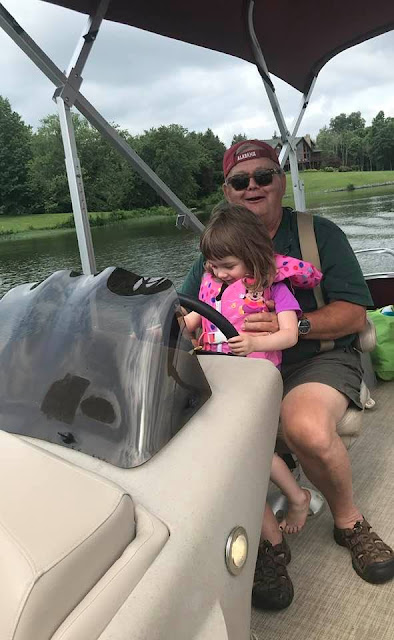 Posted by Margaret Bolton Baudinet at 3:16 AM