Well, of course, the test was positive.  I literally rolled my eyes when I got the results.  What was the use in hoping for anything? I told Michael and he agreed.

It was too early to do an ultrasound, so I did a few more blood tests that confirmed the pregnancy.  Still, I barely told anyone and remained focused on my life and the things I knew to be true and stable.

Michael and I had planned a trip to Maine the following week.  I was so looking forward to a vacation with my sweet husband. Even with no kids, we keep busy.  His work schedule is demanding.  He's a dedicated athlete.  My work is demanding.  I try to maintain my volunteer work along with my yoga commitments and all the rest.

So, off to Maine we went.  Unfortunately, my hormones started to make themselves known.  I didn't want to eat.  I was sick to my stomach.  I was weak.  I ached.  I was in no shape to hike and kayak Acadia as we'd hoped.  So, Michael saw much of Acadia by himself. 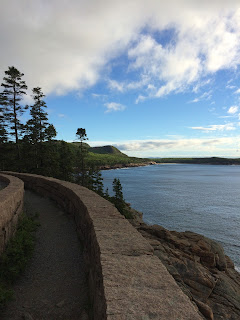 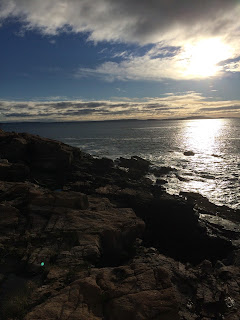 I saw the inside of our bedroom.  And a lot of rerun Fixer Upper episodes.

On the next to the last day of our visit, at seven and a half weeks pregnant, I started spotting.  Here we go again, I thought.  We called the doctor and she recommended going to the ER. Off we went, expecting the worst.

As much as I love Bar Harbor, I can't say they have the most cutting-edge emergency room I've ever seen.  After we checked in, the ultrasound technician introduced herself and said she would do a sonogram to check for a heartbeat.  Same song, different verse, I thought.  As she began the ultrasound, the technician began to giggle.

I looked at my husband, thinking that there would be heck to pay if she was looking at our deceased baby.

She wasn't.  She smiled a bright, toothy smile at me and said, "Well, aren't you going to be a busy lady?"

WHAT IS SHE TALKING ABOUT?

I gave her a puzzled look.  As I did, she showed me one....two.....three....four heartbeats.  Four heartbeats.  Wait, what?  That's right, she told us we were going to have quadruplets.  There might be a fifth, but she couldn't really tell. But, at the very least, we were having four babies in the next year.

I've never seen my husband go as pale as he did that night.  We returned to the hotel in complete silence.  Grateful not to receive bad news, but totally shocked by this revelation.

One of Michael's superpowers is that he can sleep anywhere, so of course, we walked back into the hotel room, and he fell in the bed and slept.

I, however, stay up all night reading quad mom blogs, researching cars, car seats, risks of a high order multiple pregnancy, and everything in between.

We wake up the next morning and walk down to breakfast, again in silence.  I can't tell if my husband is excited, terrified, all of the above?  None of the above?

For the remainder of our trip, my sweet husband seemed to be in a trance.  He wasn't angry, but he was indeed overwhelmed.  As we drove home, I don't think either one of knew what to make of this situation.  We spent most of the trip listening to audiobooks because we didn't know what to say. We made an appointment with our doctor for the day after our return and hoped for clarity.
Posted by Margaret Bolton Baudinet at 11:36 AM